skip to main | skip to sidebar

We are still in the French Open, and I love anything French though it all started with Proust:


And suddenly the memory revealed itself. The taste was that of the little piece of madeleine which on Sunday mornings at Combray (because on those mornings I did not go out before mass), when I went to say good morning to her in her bedroom , my aunt Léonie used to give me, dipping it first in her own cup of tea or tisane. The sight of the little madeleine had recalled nothing to my mind before I tasted it; perhaps because I had so often seen such things in the meantime, without tasting them, on the trays in pastry-cooks' windows, that their image had dissociated itself from those Combray days to take its place among others more recent; perhaps because of those memories, so long abandoned and put out of mind, nothing now survived, everything was scattered; the shapes of things, including that of the little scallop-shell of pastry, so richly sensual under its severe, religious folds, were either obliterated or had been so long dormant as to have lost the power of expansion which would have allowed them to resume their place in my consciousness. But when from a long-distant past nothing subsists, after the people are dead, after the things are broken and scattered, taste and smell alone, more fragile but more enduring, more unsubstantial, more persistent, more faithful, remain poised a long time, like souls, remembering, waiting, hoping, amid the ruins of all the rest; and bear unflinchingly, in the tiny and almost impalpable drop of their essence, the vast structure of recollection.


And as soon as I had recognized the taste of the piece of madeleine soaked in her decoction of lime-blossom which my aunt used to give me (although I did not yet know and must long postpone the discovery of why this memory made me so happy) immediately the old grey house upon the street, where her room was, rose up like a stage set to attach itself to the little pavilion opening on to the garden which had been built out behind it for my parents (the isolated segment which until that moment had been all that I could see); and with the house the town, from morning to night and in all weathers, the Square where I used to be sent before lunch, the streets along which I used to run errands, the country roads we took when it was fine. And as in the game wherein the Japanese amuse themselves by filling a porcelain bowl with water and steeping in it little pieces of paper which until then are without character or form, but, the moment they become wet, stretch and twist and take on colour and distinctive shape, become flowers or houses or people, solid and recognizable, so in that moment all the flowers in our garden and in M. Swann's park, and the water-lilies on the Vivonne and the good folk of the village and their little dwellings and the parish church and the whole of Combray and its surroundings, taking shape and solidity, sprang into being, town and gardens alike, from my cup of tea. 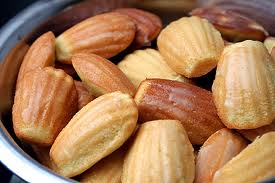 from Swann's Way, Remembrance of Things Past (Vol 1)

Posted by chellacourington@gmail.com at 10:39 AM